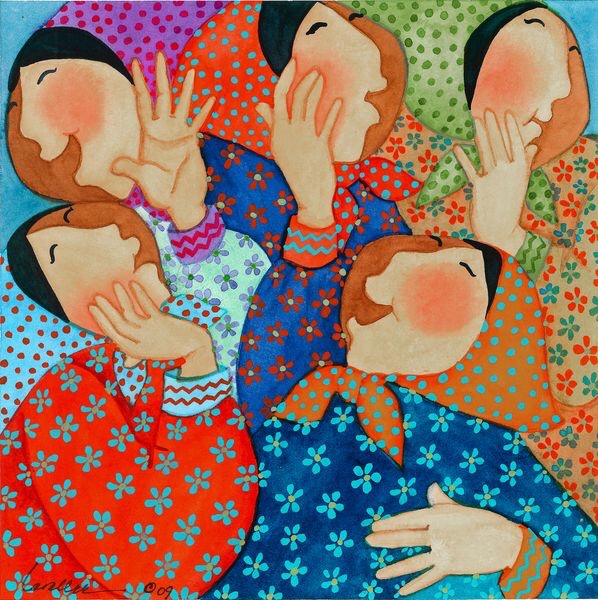 Us as Indigenous peoples.

We crack jokes about our trauma. We share stories that make us laugh about our impoverished childhoods.

“Remember when mom used to get rank mad and would throw dishes if we weren’t listening?”

“Remember that time our friends came over and looked in the cupboards and asked “why do all your boxes say fb?” and we were too embarrassed to say “oh, that’s cause we get our food from the foodbank,” so we acted like we never heard them.”

Yeah, that’s a personal one. Haha!

If you’ve ever been a funeral or wake for an Indian person you’ll hear it. Amidst the tears and sadness is laughter filling up band halls.

And it’s great! It provides connection between people who have similar experiences.

Humour heals so much that we share stories of our childhood trauma and we laugh at it because guess what, we survived that shit! We survived our parent’s residential school trauma. We survived generations of genocide. We are survivors.

We are now seeing this other side of humour.

It’s the side that directly involves the kinship systems of our nations in a highly toxic, colonial, and paternalistic manner.

It’s the side that jokes about indigenous families and people the same way that the colonizer does about us, but instead, it’s our own people doing it.

They are the jokes that make struggling Indigenous families the punchline.

“Give him some hickeys to show others he’s yours.”

“Indian woman are so jealous they’ll kick their man out for talking to a cousin.”

“He only comes around on child tax day, then he’s gone the rest of the month.”

“He’s/she’s got lots of kids with lots of women/men.”

“Every indian relationship has abuse or trauma cause of our baggage.”

These jokes/banter that our people buy into are so toxic for our kinship systems. They downplay the current attempted destruction of our kinship system that is happening today, and that has been happening for generations by the hands of colonialism.

And this kind of humour?

ITS NOT INDIAN HUMOR.

Colonizing our humour. That’s what is happening here.

Yes, humour heals. But colonial humour about our people?

That’s the kind of humour that destroys.

Humour about violent/possessive partners, deadbeat dads, or ideas of the dysfunctional “Indian” relationship, are not conducive to who we are and where we come from as Indigenous peoples.

It is not conducive because it does not focus on healing in any way, shape, or form.

It feeds colonialism’s ideas of us.

It’s time we stop making these kinds of jokes.

For our children’s sake.

Colonial humour about Indigenous peoples does not heal our people.

If it’s the kind of joke the old ones would joke about in band halls and on the land, then you know it’s Indian humour.

Otherwise. It’s destructive. It’s colonial. It is not our own.

Because if we really want to heal, as families and nations, we must focus on that REAL Indigenous humor.

The humor that heals.

We must use the humour that fills our band halls at wakes and funerals.

We must use the humour that our moshums and kokums use.

Because THAT kind of Indigenous humour is everything.

And those welfare jokes and getting damn old. Don’t you agree?